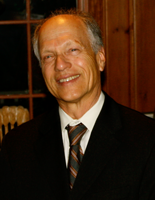 Dennis Angel is a noted authority on United States and foreign copyright law as well as the highly specialized area of legal protection of literary titles. Prior to founding The Law Offices of Dennis Angel in 1977, he was an associate for four years at the law firm of Johnson & Tannenbaum.

Since 1977, Mr. Angel has given legal opinions as to the availability of titles for numerous television shows and motion pictures as well as opinions involving the ownership of motion picture and related rights in the United States and abroad.

Mr. Angel is the author of several noteworthy articles including “Works Made For Hire Under S.22,” cited by then U.S. Court of Appeals Judge Ruth Bader Ginsburg who stated, “We are particularly impressed by scholarly commentary,” referring to his article and several others, in the landmark case of Community For Creative Non-Violence v. James Earl Reid.

His article “Legal Protection For Titles In the Entertainment Industry” has often been relied upon by the motion picture industry and is cited in both “Nimmer on Copyright” and “McCarthy On Trademarks.” He is also the author of “International Copyright Protection of United States Works.”

He lives in Scarsdale New York with his wife Linda. They have three daughters, Stephanie, Michele and Rebecca and two grandsons Ben and Ryan